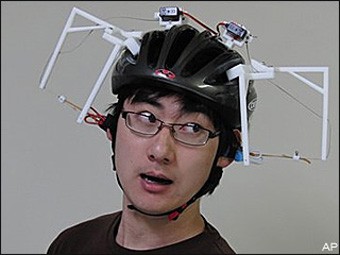 Recently we have learned about a Japanese invention for tactile navigation. The researchers propose a way of navigation to which we have been used to since the early childhood – by pulling the ears in the needed direction. They argue that it provides an instantaneous response and is very natural. Here is what our CEO Walter has to say about Pull-Navi – „Yes, I think there solution is intuitive and implements 3D navigation (pulling up and down to indicate stairs). However, I think for long term use it might be not suitable as the ears become longer and longer.“

This website uses cookies to improve your experience while you navigate through the website. Out of these, the cookies that are categorized as necessary are stored on your browser as they are essential for the working of basic functionalities of the website. We also use third-party cookies that help us analyze and understand how you use this website. These cookies will be stored in your browser only with your consent. You also have the option to opt-out of these cookies. But opting out of some of these cookies may affect your browsing experience.
Necessary immer aktiv
Necessary cookies are absolutely essential for the website to function properly. This category only includes cookies that ensures basic functionalities and security features of the website. These cookies do not store any personal information.
Non-necessary
Any cookies that may not be particularly necessary for the website to function and is used specifically to collect user personal data via analytics, ads, other embedded contents are termed as non-necessary cookies. It is mandatory to procure user consent prior to running these cookies on your website.
SPEICHERN & AKZEPTIEREN